Although foam-core panels gained attention in the 1970s, the idea of using stress skinned panels for construction began in the 1930s. Research and testing of the technology was done primarily by Forest Products Laboratory (FPL) in Madison, Wisconsin as part of an U.S. Forest Service attempt to conserve forest resources. In 1937, a small stressed-skin house was constructed and garnered enough attention to bring in First Lady Eleanor Roosevelt to dedicate the house. In a testament to the durability of such panel structures, it has endured the severe Wisconsin climate and was used by University of Wisconsin–Madison as a day care center up until 1998 when it was removed to make way for a new Pharmacy School building. With the success of the stress skinned panels, it was suggested stronger skins could support all of the structural loads and eliminate the conventional building frame altogether. After the creation of their prototype, Forest Products Laboratory entered their custom designed SIP into the marketplace where it sold for next thirty years.

Engineers from Forest Products Laboratory weren’t the only ones churning out structural panels. In fact, the 1930s saw sandwich-panel technology emerge from another source. Indeed, some of the earliest examples of SIPs can be found in the Usonian houses designed by none other than the famed architect Frank Lloyd Wright.

Frank Lloyd Wright was exceptionally innovative, and his SIPs were a result of his efforts to incorporate beauty and simplicity into cost-effective homes. Wright’s attempt at a panel contained no insulation; they consisted of three layers of plywood and two layers of tar paper. Due to the lack of insulation, this prototype failed to achieve widespread popularity and they were never produced on a large scale.

Alden B. Dow – an architecture student of Frank Lloyd Wright – experimented further with the concept of structural panels. Dismayed over the lack of proper insulation in Wright’s Usonian homes, concerned about energy efficiency, and fearful over depleting natural recourses, Dow sought to create a structural panel with an insulated core. In 1950, Dow did just that and as a result he is generally credited with creating the first structural insulated panel. 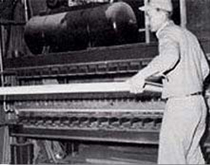